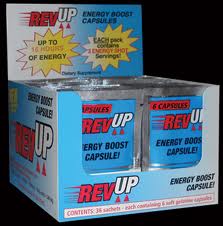 Charlotte, NC– Upfront Marketing, Inc, a Charlotte, NC based manufacturing and distribution company, has announced that they have successfully launched a new energy boost capsule to the grocery and convenience store retail market called RevUp Energy Boost Capsules® with an SRP of $3.99.

RevUp is the first effective non-liquid energy boost supplement in a soft-gel capsule form. It has zero calories, no harmful chemicals, no sugar, it boosts metabolism and provides up to 15 hours of fast acting energy in each pack. Each foil energy pack contains 6 easy-to-swallow soft-gel capsules and provides an energy boost equivalent to THREE energy drinks or energy shots.

RevUp has been formulated by qualified pharmacists who have put together a product that is not a sticky liquid, has no bad taste (like liquid energy shots have), can be swallowed with any liquid you choose, or no liquid if so desired and has caused no crash or jitters after taking it. RevUp does not have any sugars or sweeteners and provides better value than other energy products.

RevUp discloses all its ingredients to the consumer and these are: Caffeine; Vitamin B (3,6 & 12); Taurine, Inositol, Calcium Pantothenate and Glucuronolactone. All ingredients are naturally occurring and it contains no calories or sugars and so is suitable for diabetics (following consultation with their doctor).

RevUp Energy Boost Capsules® offer convenience and are just as effective as the leading energy shots and drinks. RevUp takes up less space in retail stores, is inexpensive to ship and so is highly competitive. One pack of RevUp contains 6 soft-gel capsules which will provide up to 15 hours of fast-acting energy. This is equivalent to three 2 oz energy shot bottles. The total cost of one RevUp packet is $3.99 as opposed to $7.47 for the equivalent hours from energy shots.

Why an energy boost capsule? Energy drinks and shots have been highly successful retail products because they have the right formulation and are effective. RevUp has a similar formulation that provides the same desired effect, in just two capsules.

Soft-gel capsules are the most up-to-date method of supplement delivery (being used by major pharmaceutical companies such as Johnson & Johnson) because they are easy to swallow, break down quicker in the stomach and allow the contents to be absorbed faster. The use of soft-gel capsules is the key to the convenience and value of RevUp Energy Boost Capsules®.

Trish Field, Chief Operating Officer of Upfront Marketing, Inc., the manufacturers of RevUp says, “We believe that capsules are the next wave in the energy boost market.”

“Compared to the liquid alternatives, the sheer size and practicality of RevUp makes it far easier to take in order to get the desired effect, rather than having to drink other products with a lot of superfluous ingredients,” she said.

She added, “There are other non-liquid energy supplements, but none in a soft-gel capsule form and none that work as well as RevUp, due to their ineffective formulations. Some products are almost pure caffeine that give you the jitters when you take them and a major crash when they wear off. Then there are herbal supplements that are just not that effective and often require you to chew or drink them, resulting in further bad taste and consistency issues.“

RevUp Energy Boost Capsules® is currently available in North Carolina grocery stores like Harris Teeter, and convenience stores like Circle K and Sam’s Mart. It is widely available in South Carolina stores such as Hotspots, Bountyland, The Loopmart, Pop Stores and others and is available at Road Rangers Truck Stops in Wisconsin. RevUp was also recently listed with Dearborn Wholesalers in Chicago IL.

For further information on the product or it's availability, contact Upfront Marketing, Inc. at 6047 Tyvola Glen Circle, Charlotte, NC, 28217, TollFree 1-866-240-8996, visit www.revupcapsules.com or find us on Facebook at http://www.facebook.com/revupcapsules

Pictures and samples of the product are available upon request.